I had long drooled over historical minis, and as someone who has had an obsession with human history since about the age of four It was a logical direction to go. I spent about six months looking at different periods. My first inclination was Ancients, specifically the Hellenic or early Roman period. There are many great ranges of Carthaginians, Gauls and others on the market currently. In the end however I was drawn to a completely different period, the 16th Century, and to my own country of Ireland.

16th Century(and the early 17th) Ireland is a seminal period in Irish history. Its events would shape the future of Ireland and have ramifications which we are still dealing with to this day, including having a direct impact on how Brexit is(or more accurately isnt) unfolding. The 16th century brought to an end activities and cultural trends which had been more or less in place since well before recorded history on the island.

Gaelic Ireland is a much misunderstood and overlooked place. Its importance in European and British history equally overlooked. This and the challenge of putting together a force for the tabletop which relatively speaking is unsupported and uncatered for is what inspired me to start this project. 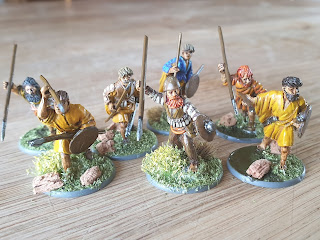 I have started with a small core force consisting of mostly Ceithernach(Kerns in English) and Galloglaigh(Gallowglasses).  These Ceithernach above are all armed with javelins and are from the Perry and Antideluvian ranges. I plan to add more of these soon as well as Ceithernach armed with Handguns, bows and two handed weapons.