I received some Isles Gallowglass and command a few months back. I finally got around to painting the fitst group. At the time of ordering one set of Gallowglass as well as the second command set were unavailable on the site which was a shame. I will order them in the future im sure. 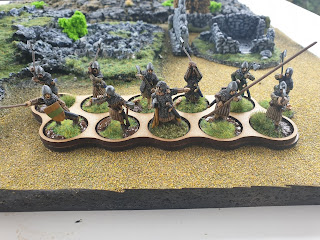 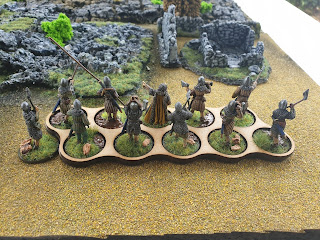 I am really fond of these and they were a joy to paint. They are slighter than the Perry Gallowglass, although not overly so. Their dress and armament is I think of an earlier period than mid to late 16th Century, however should be fine for earlier 16th Century force compositions( my plan is to build both a Gaelic and Tudor force capable of fielding Nine Years war forces as well as the fifty odd years or so before hand).

I got along with these  a few of the Antediluvian Highland bowmen which I will be using as Redshanks with bows, even if they have swords and axes slung across their backs....

April 15, 2020
Greetings all. For those of you, friends etc who know me personally and follow this blog you will already know that due to my job as a frontline Health care worker I have been extremely busy working 36 hour and even 72 hour frontline shifts. For those of you in Internet land, that is why I have not had the chance to continue my current projects. I have managed to paint up my first few WW2 American Airborne from Warlord. I will eventually get around to the huge pile of Redshanks and Galloglaigh on my table. In the meantime here are those Americans.
2 comments
Read more

January 06, 2020
It has been a hectic Christmas and new year period. I did manage however aside from some fierce work/family multi tasking to get in some Ale drinking and conversion work. I have however been unfaithful to my 16th century project and cheated on them with some late war Germans. It has become more than a fling though, and I am well on the way putting together an entire Heer division with plenty of Fallshirmjager, SS and Volks Grenadier units mixed in too! Hobby infidelity aside, here are my latest conversion additions for my Irish. Most of the shot are Perry, some really very nice sculpts, with the exception of the guy in the back with the blue jacket who is a Eureka Portuguese Colonial conversion. All the pikemen are Eureka conversions. The painted one has had a Leine added with greenstuff.
2 comments
Read more