"The Traitor and the Xenos are many, and we are few. I know what you are thinking brother, they stand not a chance against us". Captain Viriatos, 1st company, Marines Errant Adeptus Astartes. 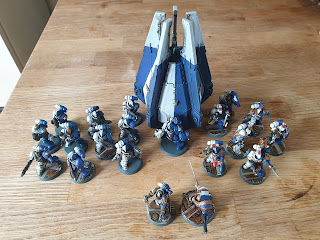 A change of direction from my Gaelic Irish project. I wanted to show off my Warhammer 40,000 Space Marine chapter. I began my hobbying in the 1990's as a 10 year old with Games Workshop's Fantasy, Necromunda and 40,000 games. I collected and played many armies, but never had the chance to do a Space Marine chapter. A number of mo ths ago I started a new army. So here are the Canon chapter, the Marines Errant. 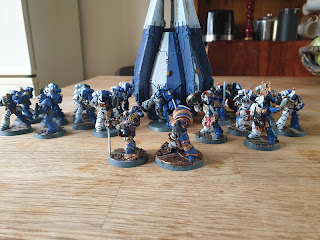 The Marines Errant are a successor of a successor chapter, which in the lore is not that common. Their predecessor chapter are the Eagle Warriors who are a second founding chapter of the Ultramarines. They are a fleet based crusading chapter with a notable history, particularly their involvement in the Badab war. In future posts I will go into more lore detail, in particular what elements of the lore I have used to influence the look, feel and composition of my force. At the moment I have exclusively Primaris except for a drop pod and two Horus Heresy Praetor resin models(middle picture above). 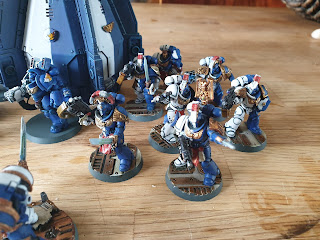 Above are my converted Intercessors. They can represent Sternguard, or 1st Company veterans. This force is not being put together with tabletop play in mind, but rather to be thematic and representative of what I think a Marines Errant force should look like. I will as already mentioned go deeper into this theme and the lore in a future post. For now though, I wanted to show some of the very first miniatures I have painted in fifteen years. 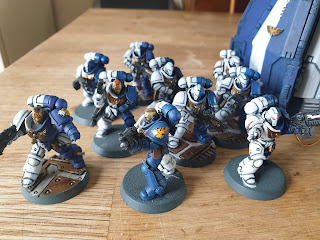 This squad were the first additions. Indeed, the first miniatures I have done in fifteen years. The bases on the first few were stock bases before I bought the necromunda bases the majority of the force are on. I will swap these out at some stage. It took me a few figures to get the muscle memory back and balance back and this can be seen in the final finish between the individual models. 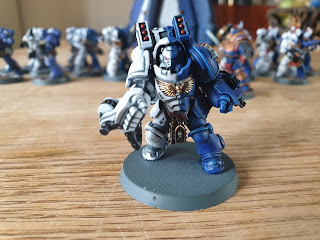 The first of my three Aggressors painted up well I think. I was initially wary of the plethora of new miniatures Games Workshop has brought out, particularly the complete change of aesthetic as well as tabletop impact of them, but I have to say I thoroughly enjoyed painting this one, even if they have a ridiculous name! 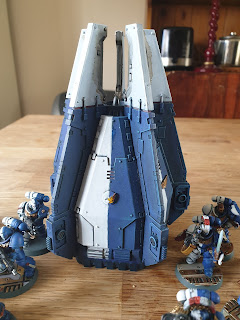 Finally we come to the humble drop pod. It fits well with the theme of a fleet based crusading chapter, although given that Primaris miniatures cannot use it on tabletop means that in gaming terms it is redundant. I got it for a steal on ebay, fixed it up and enjoyed actually painting it, which in itself makes a it worth the addition. It is a great centre piece for thematic display purposes and if I ever do add non Primaris squads it may even be useful when I get around to playing.

Thats all I have for the moment from the Emperors finest. I will be back soon with more Mari es Errant in future posts.