October 24, 2019
The first of the Irish Pike have arrived to continue the fight against the foreigners and secure victory for Irelands various and fractured Gaelic Kings and sub Kings.

DISCLAIMER: This is the first time I have ever used putty and green stuff to convert a miniature and it reminded me of learning to ride a bike, it cant be learned without just doing it, and it wont be pretty at first.

Despite falling off many times and scraping metaphorical knees to bits I pushed ahead and put together my first conversions. 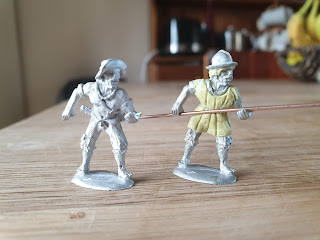 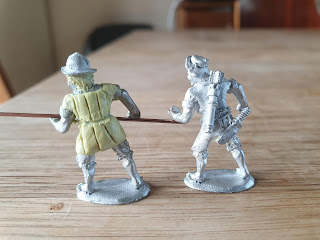 We have the original Eureka Miniatures 16th Century Portugese Colonial and the same mini converted to Gaelic Pikeman in Aketon and trews with Morion helmet.

I do hope that when primed and painted it papers over the rudimentary conversion and brings the miniature closer to feeling like a 16th Century Irish pikeman. 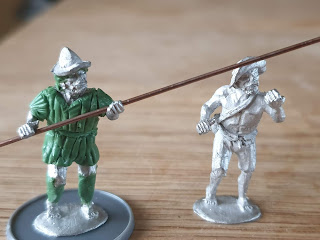 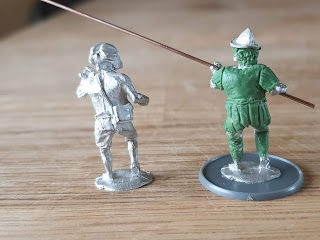 Here again the original Eureka and my conversion, this time with greenstuff. I wanted to try my hand using both materials and I did find both advantagous as well as detractory qualities for both Greenstuff and Milliput.
The conversion of bare legged to trews was not very successful, and again hopefully a covering of paint may redeem the effort somewhat. 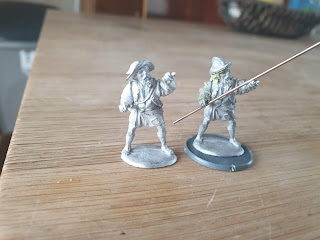 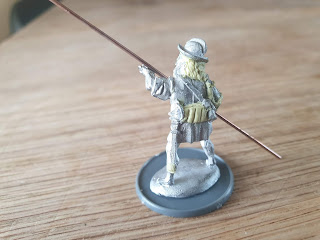 My final and actually initial effort. I started the conversion work with this mini. With shirt and jacket already in place I decided to add some detail to sleeves and back along the lines of Kerns of the time. Added Morion helmet, resculpted hair and added a tassle to the scabbard.

The learning curve when sculpting as I have discovered is fairly acute. I very quickly gained an understanding of how to manipulate the putty, which tools to use and gained a fair bit of precision, however to achieve the conversion results I would ideally like will take many dozens of hours more of practice.